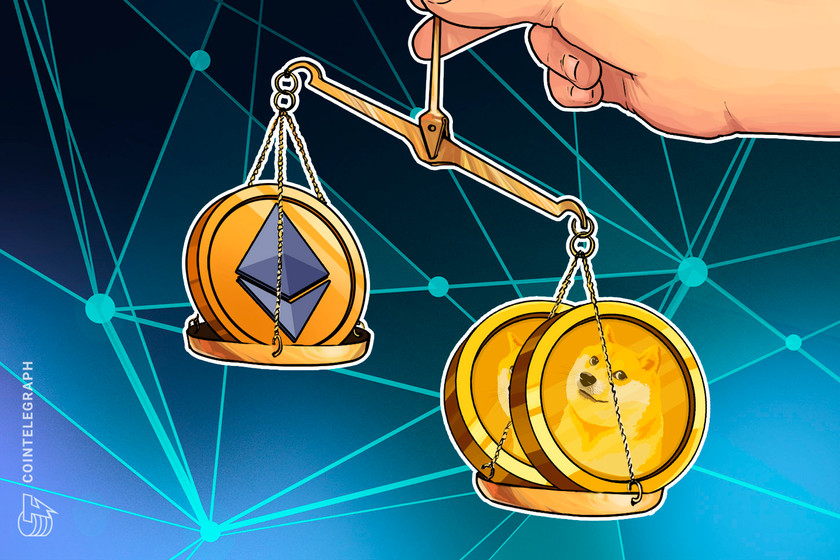 Dogecoin’s (DOGE) dramatic surge up the market capitalization rankings coincided with the reawakening of DOGE whales as the blockchain’s metrics surged to new heights in the past 24 hours.

Ether is the world’s second-largest cryptocurrency by market cap and its blockchain is the most actively developed in the world — with twice as many monthly commits on GitHub as Bitcoin (BTC).

Dogecoin is a meme coin created as a joke in 2013, which derives much of its perceived value from the cute photo of the Shiba-Inu dog that emblazons its logo. It has no active developers, and its own creator sold all of his coins in 2016 during a period of unemployment.

What’s more, in an industry that promises decentralization, Dogecoin stands out like a sore thumb. Just one address contains 28% of the total coin supply, while 11 addresses make up 46%. This point was not lost on Tesla CEO and vocal Dogecoin fan Elon Musk, who said he would lend full support to the cryptocurrency if the top holders sold off most of their coins.

“If major Dogecoin holders sell most of their coins, it will get my full support. Too much concentration is the only real issue imo,” Musk tweeted in February when Dogecoin was priced at around $0.05.

Prior to Dogecoin’s reawakening due to Reddit pumps and Musk’s tweets, the coin had achieved a value of $0.01 just once before in its entire eight-year history. The coin’s sudden 400% surge to above $0.30 in the past week alone has drawn a lot of eyes, bringing them to bear on the Dogecoin subreddit.

According to data from analysts at Skew.com, the number of new subscribers to the sub increased exponentially in the past week in line with the surging coin price, rising from hundreds to thousands per day.

Crypto insights platform Santiment says it’s tracking some key metrics indicating that it may be a good time to...

About $7.65 billion entered the cryptocurrency market in just three hours via a widely unknown altcoin on Monday.Dubbed as...

Is this last major threat for Bitcoin and Altcoins’ recovering market?

After consolidating for almost 32-hours between the price range of $34,000-$36,000, Bitcoin managed to avoid another massive drop. The...